A fuel cell is an electrochemical cell that utilizes a pair of redox reactions to convert the chemical energy of a fuel and an oxidising agent into electricity. Fuel cells differ from most batteries in that those who require a constant supply of fuel and oxygen to maintain the chemical reaction, whereas chemical energy in a battery is variety of different areas from metals and their ions or oxides that are already present in the battery, with the exception of flow batteries. As long as fuel and oxygen are accessible, fuel cells can produce electricity forever. There are many different types of fuel cells, but they all have had an anode, a cathode, and an electrolyte that allows ions to travel between the two sides of the fuel cell, most often positively charged hydrogen ions (protons). Fuel cells produce water, heat, and, depending on the fuel source, very small amounts of nitrogen dioxide and other emissions in addition to electricity. A fuel cell's energy efficiency varies from 40 to 60 percent, but if waste heat is captured in a cogeneration scheme, efficiencies of up to 85 percent can be obtained.

Market Analysis:  From an estimated value of USD 263 million in 2020, the worldwide fuel cells market is expected to reach USD 848 million by 2025, growing at a CAGR of 26.4 cent over the forecast period. 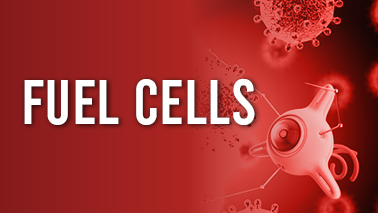